You just need 5 days to explore 2 main cities of Laos and visit all the best highlights in thoses city, Luang Prabang is an World Heritage in Laos, a spleepy city in the green of jungle...

On arrival at the airport, you will be met and transferred to check in the hotel. The rest of the day is your own time at leisure

Optional: Enjoy a private Baci ceremony after sunset at a local family. The Baci ceremony as a traditional ritual of the Lao people expresses the spirituality of the country and is a highly memorable experience and a deep insight into Lao culture for the participants. Overnight in Luang Prabang

Today, you will first visit Royal Palace Museum, which displays many interesting artifacts and learn the history of Royal Family. We then embark on a small motorboat upstream on the Mekong River, which also gives us a breathtaking view of the tranquil countryside, before reaching the mysterious Pak Ou Caves. You will explore some thousands of gold plated Buddha statues in different shapes and sizes left by pilgrims. Along the way, we stop at the village of Ban Xanghai, where they make the local rice wine.

On arrival back in the city, we will visit magnificent Wat Xiengthong, which represents classical Laotian architecture a the one of the most important of Lao monasteries and remains a significant monument to the spirit of religions  and was built in 16th Century. Afterwards, we will visit the Traditional Art and Ethnology Center to learn about Laos’ many ethnic cultures. And then, we will transfer to visit Wat Siphouthabaht to watch the sunset; this is the really peaceful place to catch the last beauty of the day. The tour ends after a visit to the famous Night Market, where you can find a lovely collection of handmade textiles made by local and hilltribe people surrounding Luang Prabang. Overnight in Luang Prabang

Option: if time permits, you may wish to visit the Kopnoi Promotion Center, and enjoy the Tea tasting Ceremony, where you can also have a small lecture about Lao culture.

An optional early start that gives you the fantastic opportunity to participate in the daily morning rituals of saffron-clad monks collecting offerings of Alms (ubiquitous sticky rice) from the faithful residents. This tradition is very unique in Laos, and  we will take a short visit to the morning local market near the Royal Palace. At the market, you can find anything from rice, to fresh vegetables, to steamed fish, frogs, and anything else that might be the day’s catch, just set up on the ground, this is what the locals do every day. This is really the chance for you to get a real flavor of the local culture.

After breakfast at the hotel, we ascend the 329 steps to the top of Phousi Hill for a panoramic view of the city and the Mekong River. We then visit Wat Visoun, dating back to 1513 during the reign of King Wisunarat (Visoun) as Luang Prabang’s oldest temple and was once home to the Prabang Buddhas. We then transfer directly to the beautiful Kuang Si Waterfall where you can cool off with a refreshing swim in the pools or walk along the forest trails.

Before returning to Luang Prabang, we stop to visit the Kuang Si Falls Butterfly Park (closed on Tuesday), one of the must-visit spots, where you can have an optional 15 minute tour to learn about butterflies and local flora.

Laos is also known for its traditional crafts, we will take a short visit to the Ock Pop Tock Living Craft Center, where you will have a short tour so you get information about Silk, about weaver, about the Women that work in the Centre.

We then transfer out to the airport to take the flight to Luang Vientiane. Overnight in Vientiane

In the morning, we will first visit Wat Si Muang, which is very famous for its supernatural power. After that drive to Buddha Park which takes around 45 minutes away. On the way, stop and take photos of the Friendship Bridge which was built by the Australian government in 1994 and links Laos and Thailand.

Arrive at Buddha Park and enjoy a stroll around the park. Also known as Xieng Khuan, this unusual park is filled with over 200 Buddhist and Hindu statues. The quiet and tranquil setting along the Mekong River is a contrast to the slightly eccentric sculptures which were built in 1958 by a Laos’s shaman. The concrete sculptures are bizarre but intriguing, sitting majestically in the peaceful park.

After visiting Buddha Park, start the drive back to Vientiane. En route, stop at Mai Savanh to explore the traditional textiles of the Lao people. This shop specializes in high quality silk products and involves several families in their process from the northern province of Luang Nam Tha Province and the southern provinces of Attapeu and Sekong. (Note: Mai Savanh is closed on Saturday & Sunday)

In the afternoon, have a visit to Tha Phat Luang as the holiest site in Laos and constructed by King Setthethirat in the 16th century,

Then, enjoy a panoramic view over the city as you climb the stairs to the top of Patuxai, Vientiane’s own “Arc de Triomphe" as a war monument in the centre of Vientiane, Laos, which was built between 1957 and 1968. The Patuxai is dedicated to those who fought in the struggle for independence from France.

Continue down Lane Xang Avenue for the serene Wat Sisaket, the only temple left intact after the Siamese (Thai) invasion in 1828. It is one of the most beautiful temples in the capital, and its breezy teak covered hallways are filled with thousands of miniature Buddha statues.

Continue on to the nearby Wat Phra Keo as a religious museum, Wat Phra Keo displays a collection of both Lao and Khmer works of art.

You are free to stroll around before taking the departure flight

* Transportation with air-condition in private

* Boat trip as stated in above sights

* Meals as per program

* Travel Insurance in all kinds

* Tip, drinks and other personal expenses

* Transportation with air-condition in private

* Boat trip as stated in above sights

* Meals as per program

* Travel Insurance in all kinds

* Tip, drinks and other personal expenses 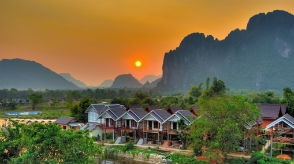 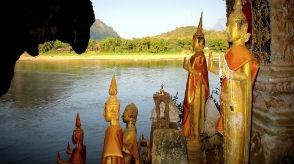 Luang Prabang - 4 Days
4 days 3 nights
Luang Prabang is the most popular destination in Laos. If you have 4 days 3 nights in this city, you will have a great view of this rustic ancient city as a sleeping heritage in the thick forest.
$240 - $250 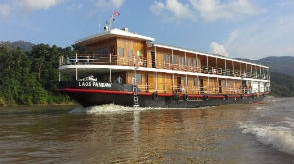 Mekong River Cruises in Laos
3 days 2 nights
There 2 optional cruises in Laos, One in North of Lao and the other in Southern Laos.
$300 - $700 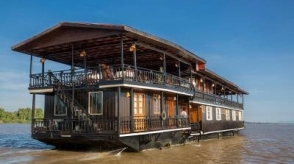 Vat Phou Cruise
3 days 2 nights
The Vat Phou Mekong Cruise is a journey that starts and finishes in Pakse, Both cruise itineraries (Down and Up) visit the majestic UNESCO World Heritage Vat Phou ruins at Champassak, the mysterious Oum Muong ruins at Huei Thamo, the 4,000 Islands with its winding waterways, and the Phapheng waterfall on the Laos – Cambodia border.
$500 - $700 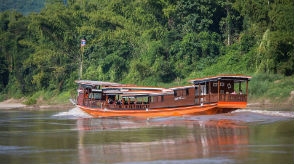 Luang Say Cruise - 2 Days 1 Night
2 days 1 night
Luang Say Mekong Cruises has three boats travelling from Huay Xai to Luang Prabang, or, from Luang Prabang to Huay Xai. All programs stop over for one night in our Luang Say Lodge in Pakbeng.
$300 - $400 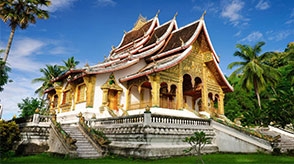 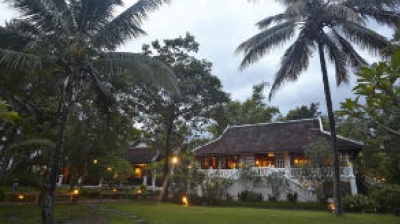 Villa Santi Resort
$90 - $120
Mountains in the horizon with never ending rice fields at your doorstep and canals of lotus flowers, creeks and waterfalls stretch through the sprawling serene landscape of Santi Resort & Spa. The 12-hectare Resort offers 67 elegantly designed rooms, Bungalows and Suites – all with its own private balcony. Located approximately 15 minute drive from town center of Luang Prabang, the resort offers a free form swimming pool, spa, steam sauna and gym-truly a place to unwind, rejuvenate and live–up the absolute realization of perfect vacation.
Detail

Luang Say Logde Hotel
$150 - $300
On the left bank of the river, the Luang Say Lodge is backed by mountainous jungle. The large pavilions of solid teak and rosewood all have beautiful vistas looking out over the Mekong river and the mountains beyond. The traditional Laotian architecture provides accommodation of comfort and character, each bedroom equipped with high ceiling mosquito nets, electric fans and a large private bathroom with hot shower and western style toilet. The Luang Say Lodge sits peacefully above the Mekong River, blending artfully into the natural environment through careful landscaping, raised platforms and indigenous styling. It features 20 large pavilions, each elegantly furnished in dark toned wood and white fabrics, and offering stunning panoramic views on three sides of the Mekong.
Detail 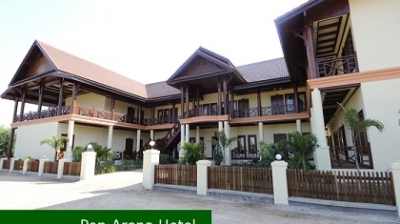 Muang La Lodge
$80 - $230
Offering an unexpected level of comfort in a remote corner of northern Laos, Muang La Lodge uses its bi-cultural origins to offer an experience rich in tradition and customs. An absolute must for connoisseurs of travel who wish to explore the more remote parts of SE Asia.
Detail 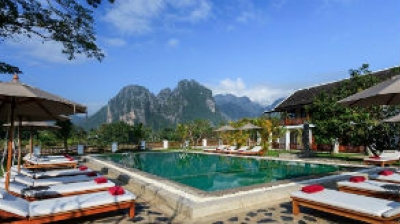 Vang Vieng Riverside Boutique Resort
$120 - $300
Riverside Boutique Resort is a luxury resort located on the banks of the Nam Song River with stunning views over the limestone mountains of Vang Vieng. The property is set within a tropical garden and organized around a central swimming pool. Despite its location in the quietest part of town, this hotel is within easy reach of the center and provided as a perfect departure point for excursions in the countryside. Riverside Boutique Resort is known to be the first high-end hotel that systematically celebrates the exceptional cultural and natural diversity of Laos.
Detail

Champasak Grand Hotel
$80 - $300
Located along the Mekong River and in the City, is Pakse only Luxurious Deluxe Business Class Hotel. The Hotel is just 5 kms or 15 minutes away from Pakse International Airport with 215 well-appointed rooms and suites offering magnificent views of the River and City while 2 Conference rooms offer events of any occasion.
Detail

Lao Plaza Hotel
$120 - $300
In a capital city which is famous for its temples and monuments, Lao Plaza Hotel has been created to dominate the growing skyline. As the country's first official 5 star hotel, the Lao Plaza Hotel is the center of the emerging capital's business and entertainment world. Hotel rooms: 114
Detail 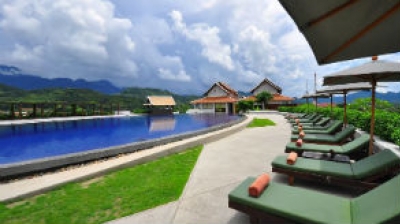 Luang Prabang View Hotel
$150 - $380
The Heritage City in Northern of Laos. It boasts breathtaking with panoramic views of the countryside valley. The hotel’s construction began in 2007. It was a multimillion dollars project which took three years to complete. This truly magnificent hotel was restored to its original splendor and is easily among the best one can expect in this world Heritage City. Restoration work was guided by the renowned local exterior designer Mr. Boun Kham and the interior was designed by Mr. Ewan. Innovative and traditional colorful designs were used to restore entire rooms, right down to the finer detailing in draperies, ceilings, teak wood floors and murals. Hotel rooms: 54
Detail 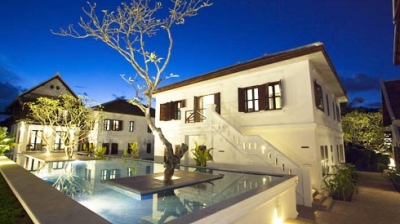 Victoria Xiengthong Palace
$160 - $380
Located in the heart of Luang Prabang, surrounded by the golden spires of the town’s famous Buddhist temples is Victoria Xiengthong Palace, the last residence of the Laos Royal Family. This beautiful boutique property has been lovingly restored to its former glory, and once more sits proudly on the banks of the Mekong River. Hotel Room: 26
Detail