Myanmar has a tropical monsoon climate. It is characterized by strong monsoon influences, has a considerable amount of sun, a high rate of rainfall, and high humidity that makes it sometimes feel quite uncomfortable. The lowest temperature is about 16 oC .

- from November to February, with average monthly temperatures of between 20°C and 24°C

the dry season starts in November with lower temperatures, the best time to go is between November and February,
It is quite Cool – November to February is warm to hot during the day and the air is relatively dry. (20°C and 24°C)

From February until the beginning of the rainy season, much of the country (particularly north of Yangon) can be dusty and hazy, sometimes hindering long-distance views.

With generally high temperatures in the popular locations around the country, lightweight cotton and linen clothing is recommended for most of the year; warmer clothes may be needed for the evenings, which can sometimes be cool. Even outside the rainy season there can on occasion be downpours, so it is advisable to pack a light raincoat. Travelling to higher altitudes and further north, it is advisable to take warmer clothes, particularly in the cool season, when temperatures can drop significantly.

What to bring when you travel around?

Myanmar also has been faced with these hazards, including floods, cyclones, earthquakes, landslides and tsunamis.

You should watch the local news and weather forcast for the update information, the flood is always bad in Myanmar, because of high rate of rainfall.

- Earthquakes: Myanmar  lies on a very active earthquake zone. Most are caused by the north-south trending Sagaing fault, running through central and western Myanmar (Burma). In the last year, there were 48 earthquakes, most under magnitude 5 and causing little damage

- Cyclones: Myanmar’s coastline along the Bay of Bengal is susceptible to cyclones. When they make landfall the high winds and flooding wreak destruction. The deadliest storm was Cyclone Nargis in 2008, Myanmar’s worst natural disaster

- Floods: The rainy season in Myanmar (Burma) brings floods to delta and other river areas, washing out towns, fields, roads and bridges and causing landslides. 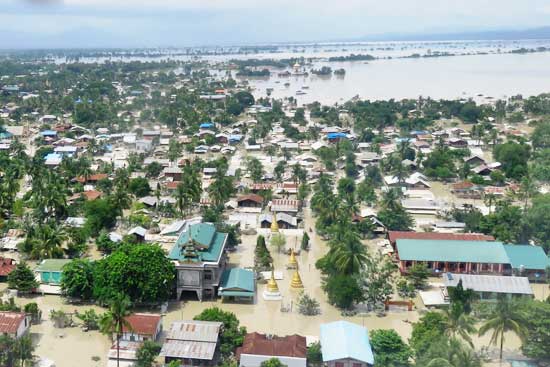 Myanmar Public Holidays
Many shops, banks and other services close during public holidays, so it's best find out when the Myanmar public holidays are planned for your 2017.

Local Currency & Cost
The currency of Myanmar (Burma) is the Burmese Kyat, You should expect to rely on cash for most of your stay; preferably US dollars. Once in country it’s easy to exchange US dollars into Kyats and exchange rates are generally fair

Safety & Security
The vast majority of people in Myanmar are friendly and helpful, In all the areas that foreigners are allowed to visit, Myanmar is very safe in terms of personal security: incidents of crime against foreigners are extremely low and Yangon is considered to be one of Asia’s safest large cities, with no areas that need to be avoided.

Health & Safety
Most medical facilities in Burma are inadequate for even routine medical care. In an emergency, you would likely need to be medically evacuated to a hospital outside Burma. Medical evacuation from Burma is expensive and is most often transacted in cash

Visa & Passport
Most foreign nationals require a visa to enter Myanmar, You should apply for your visa at a Burmese embassy or consulate abroad before you arrive in Burma, Tourist visas are valid for 28 days

General information
The government has encouraged tourism in the country Since 1992, Although the the infrastruture are still very poor, the foreigner find very difficult to travel in country by train or by bus, the airlines are too expensive for even a short distance. The most popular destinations for visitors are Mandalay and Yangon, Ancient Bagan, the nature of Inle Lake, Hpa An and other sites in the Southern Myanmar, also the beauty of the South Coast.