The distance: about 110Km South of Hanoi

Ninh Bình Province is a tourist center with many attractions:

Ancient capital of Hoa Lu, witnessed the crowd of King Dinh Tien Hoang (924-979), a hero who settled Twelve Warlords . Dinh Bo Linh was born at Hoa Lu village. When he was a boy, he often used reed wool to hold field maneuver with other shepherds and practiced martial arts. Now King Dinh Tien Hoang Square is being built in the city in memorial of him , becoming a stunning tourist attraction.

- Phat Diem Cathedral, ranked as one of the most beautiful churchs in Vietnam, with a mixing Western-Eastern architecture. The church is a prominent historical object witnessing an important movement in Vietnam religion. It took 24 years to build this church from 1875 to 1898. And as its name suggests, it was completely built of stone and wood that are readily available in the mountain area of Ninh Binh.

- Tam Coc & Bich Dong, with a numerous other caves made up a spectacular region for boat touring and cave exploring, the place is a karst area with many limestone rocks and islands in the rice fields.

- Trang An Scenic Complex, a newly-discovered area for tourism with stunning and untouched beauty. Recently Titan Crew, aka King Kong movie making crew has visited Trang An for some of the most important scenes in "Kong: the Skull Island", on air in 2017.

- Duc Thuy, aka Non Nuoc mountain is a unique attraction for its picturesque location and historical values. The mountain has long been a subject of creativity for hundred famous poets throughout history. There are many poetries writen in Nom ( Chinese-like letters), carved on the side of the mountain, being left by historical figures. The mountain is the famous symbol of the city, also of the province.

- Recently Thung Nham bird garden has been known for more tourists. Resorts, bird viewing, boat tour, wooden house residing, along with many other services are available for tourists. Thung Nham is about fifty-minute drive from Tam Coc- Bich Dong.

In a couple of years Ninh Binh will have its own beach, also known as Con Noi Beach in Kim Son. 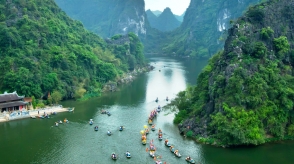 Trang An Landscape Complex
Situated near the southern margin of the Red River Delta, the Trang An Landscape Complex is a spectacular landscape of limestone karst peaks permeated with valleys, many of them partly submerged and surrounded by steep, almost vertical cliffs. Exploration of caves at different altitudes has revealed archaeological traces of human activity over a continuous period of more than 30,000 years. They illustrate the occupation of these mountains by seasonal hunter-gatherers and how they adapted to major climatic and environmental changes, especially the repeated inundation of the landscape by the sea after the last ice age. The story of human occupation continues through the Neolithic and Bronze Ages to the historical era. Hoa Lu, the ancient capital of Viet Nam, was strategically established here in the 10th and 11th centuries AD. The property also contains temples, pagodas, paddy-fields and small villages.
View more 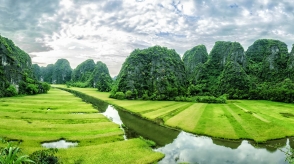 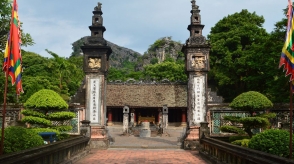