Nha Trang is a coastal resort city in southern Vietnam known for its beaches, diving sites and offshore islands. Its main beach is a long, curving stretch along Tran Phu Street backed by a promenade, hotels and seafood restaurants. Aerial cable cars cross over to Hon Tre Island, and the nature reserves of Hòn Mun and Hon Tam islands, reachable by boat, have coral reefs.

Tran Phu street is the backbone of the city, accompanied by a pleasant waterfront promenade, palm trees and the nearly 6km of beach. Careful when you cross the road - one of the most dangerous in Vietnam.

Before 15th Century, Nha Trang was apart of Cham Pa Kingdom, and then Vietnam Kingdom conquered it in 15th Century

In 16th Century, Nha Trang was an wild land with small inhabitants. At that time, there was a fishing village in this coast..

In 1925, Nha Trang was built up as small town under French Colonial Support.

In 1975 April, Nha Trang was taken over by the North Communists

Nha Trang Bay covers an area of 507 sq km2 in emerald water, with over 19 islands and islets. It has been a tourist city since 2000, many hotels are built here.

Nha Trang has a tropical savanna climate with a lengthy dry season from January to August and a shorter wet season from September to December, everage temperature is around 26 oC.

Nha Trang's economy relies largely on tourism and is one of the most important tourist hubs of Vietnam, thanks to its beautiful beaches with fine and clean sand and the clear ocean water with mild temperatures all year round. 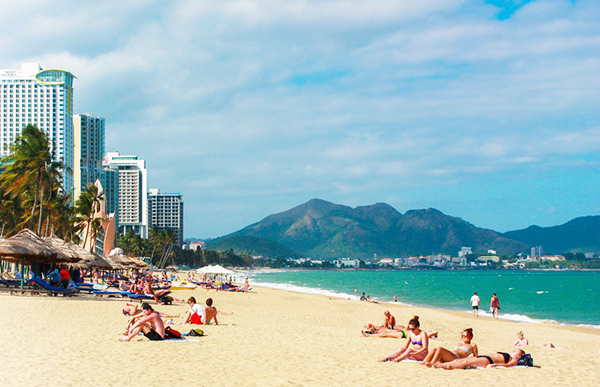 Popular Places you should visit

- National Oceanographic Museum of Vietnam: This is like an aquarium with popular and rare species of the sea. A perfect place to bring kids as they will get to see sharks, turtles, coral reefs, lionfish, sea horses, and many other creatures

- Long Son Pagoda: The pagoda was established in 1963 to honour the monks and nuns who died demonstrating against the Diem government. Beware of cheaters claiming they are students studying in the temple demanding that you offer a donation to the school before going up the pagoda

- Po Nagar Cham Towers: These four brick towers were built by the Cham civilization between the 7th and 12th century to honor Yang Ino Po Ngar, mother of the kingdom, and the incense aroma emanating from within makes it clear that this remains a religious site for the local Buddhists of Nha Trang today. The longevity of these last vestiges of a once-dominant South East Asian civilisation should impress temple enthusiasts even if the insensitive restoration and surrounding mass of tourists don't. The small complex sits on a hill which enjoys views across Nha Trang's fishing village.

- Fishing village: The fishing village is located between the old and the new bridge. When the fishing boats are coming in or going out it is a beautiful sight

- Monkey Island: Catch a ferry to Monkey Island, which is full of monkeys, has a 10AM circus and simple go-cart track

- Thap Ba Hot Springs and Mud baths: a good place for mud bath and massageNOTE: The monsoon season is from October to mid December. Sea winds can be heavy, and sometimes the weather can get pretty chilly. 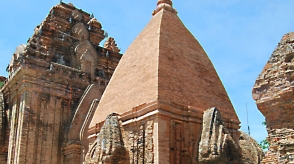 Po Nagar Cham Temple
Ponarga Temple was widely known to be erected in the 8th Century (781 A.D), the information of the temple complex was recorded on a stele, The Po Nagar complex is situated on Cù Lao Mountain. It consists of three levels, the highest of which encompasses two rows of towers. The main tower is about 25 m high
View more

Long Son Pagoda
Long Son Pagoda is a Buddhist temple in the city of Nha Trang; it is a very popular for tourists and located at the foot of Trai Thuy Mountain, It was renovated and expanded again in 1940 before being destroyed during Vietnam War in 1968. After that, attempts have been made to rebuild the construction, but the temple has not been fully restored until recently.
View more 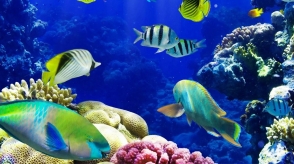 Tri Nguyen Aquarium
Tri Nguyen aquarium in Nha Trang looks like a fossil ship that is covered by the moss and run aground in the Strait for long time. The ship is a unique architecture, was completed in 1998. With the height of 30m, the length of 60m and the width of 30m, the ship is divided into many floors with a fist pond on the ground floor, the souvenir shops on the second floor, a restaurant on the third one. On its deck is a mast and a cannon, an ideal position to enjoy the fine view of the sea from high above. Inside the fossil ship is a vast ocean.
View more 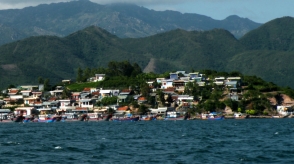 National Oceanographic Museum of Vietnam
Founded in 1923, about 5km from Nha Trang City Center, the Museum of Oceanography is meant for storage of artifacts (animals and non-animals) collected up until now from the ocean, and also a witness of crucial evidences of oceans all over the country and through different eras.
View more