SAPA is a remoted area located in the North West region of Vietnam at the altitude of 1,650m above the sealevel.

Sapa is about 37km from Lao Cai border city, you can get there by bus or by train from Hanoi , it is about 380Km North West of Hanoi.

By bus: about 6 hours, the high way is just built up for those mountainous provinces

By train: You can go there by overnight train for about 8 hours

The small town is located on the Hoang Lien range of mountains. From Sapa, you can have a great view of Fansipan mountain which has the height of 3143m above sea level as considered as Himalyas in Vietnam. And on the side South West of Sapa, it is a huge Muong Hoa Valley where many hill tribes inhabite and live on the terrace rice farm.

The climate is moderate and rainy in summer (May—August), and foggy and cold with occasional snowfalls in winter (from Feb to March), very dry and cooler from October to December and its temperature is around 20-25 oC. Sometimes it is - 3 oC in Feb or March.

Ethnic Groups
Sa Pa is a quiet mountain town and home to a great diversity of ethnic minority peoples. The total population consists mostly of minority groups. Besides the Kinh (Viet) people (15%) there are mainly 5 ethnic groups in Sapa: Hmong 52%, Dao 25%, Tay 5%, Giay 2% and a small number of Xa Pho. Approximately 7,000 live in Sapa, the other 36,000 being scattered in small communes throughout the district 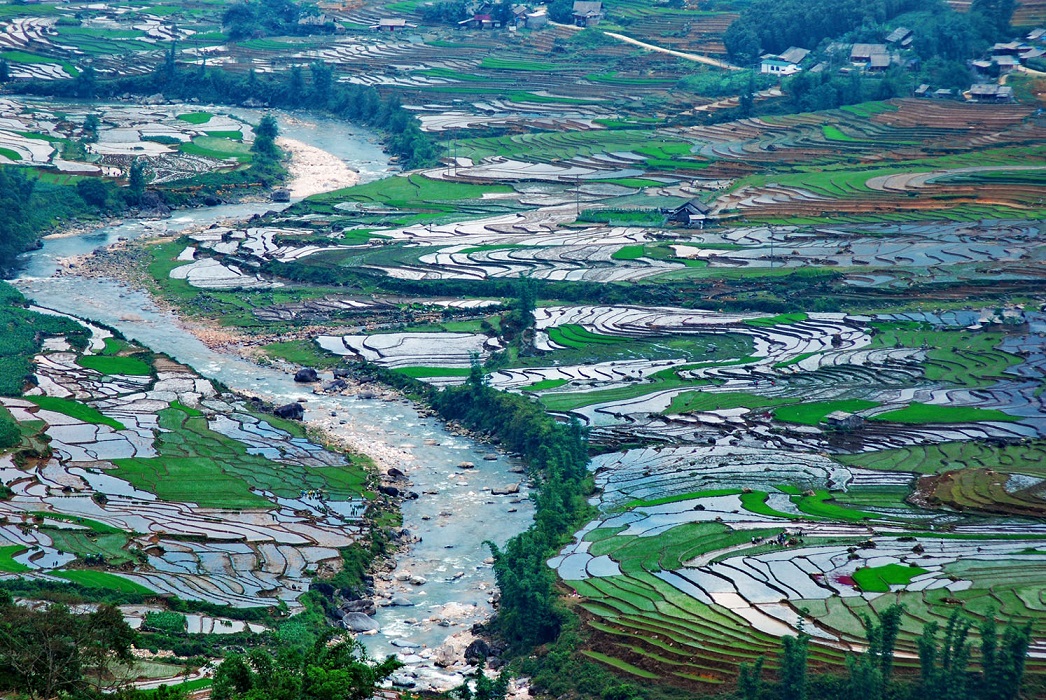 Lao Cai province and Sapa Mountainous area were occupied by the French in 1898, when the French government decided to have a census of hill tribes in the mountainous provinces. The French also found Sapa as a good location for the summer holidays, This place was great to escape the heat of 35 - 40 oC in the North Vietnam, the temperature in the summer here only reach 20 - 28 oC.

In 1910, they started to build many palaces, accounting for 300 villas and palaces for holidays in Sapa. And Sapa became a holiday destination in Indochina

In 1920, the French Colonial government built the railway line to Lao Cai from Hanoi, and they opened a trail for all vehichles to approach Sapa.

In the Indochina War ( 1949), Sapa was destroyed by Vietminh ( Vietnam Communists) as they thought those palaces and villas were the French base for the battles.

After Vietnam War, during the 1990s, Sapa was rebuilt, many new hotels were built for both foreign tourist and Vietnamese. Now Sapa becomes a busy town, an attraction for almost Vietnamese in the summer, even in the winter time. They come here for great moutainous landscape, for various hilltribes

In 2015, the longest cable car was opened for Fasipan Mountain View, The travelers will enjoy the view from the height on the cable car. 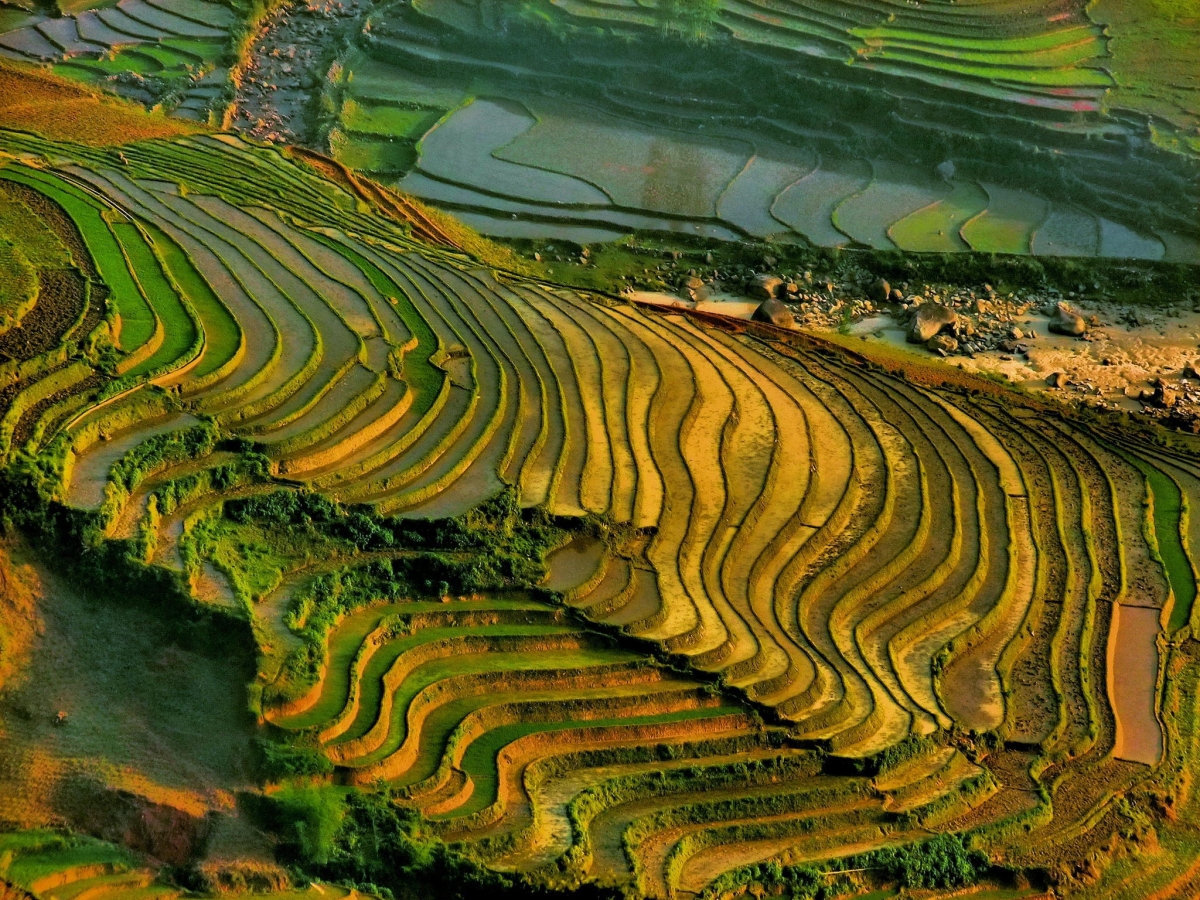 Most of the ethnic minority people work their land on sloping terraces since the vast majority of the land is mountainous. Their staple foods are rice and corn. Rice, by its very nature of being a labour-intensive crop, makes the daily fight for survival paramount. The unique climate in Sapa has a major influence on the ethnic minorities who live in the area. With sub-tropical summers, temperate winters and 160 days of mist annually, the influence on agricultural yields and health related issues are significant.
The geographical location of the area makes it a truly unique place for many interesting plants and animals, allowing it to support many inhabitants. Many very rare or even endemic species have been recorded in the region. 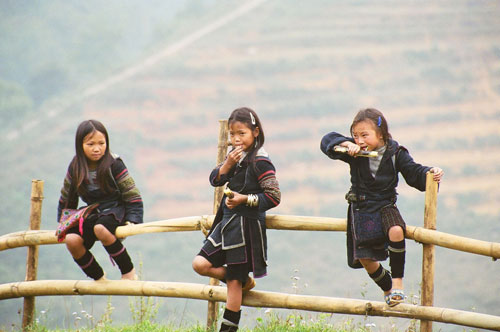 The scenery of the Sa Pa region in large part reflects the relationship between the minority people and nature. This is seen especially in the paddy fields carpeting the rolling lower slopes of the Hoàng Liên Mountains. The impressive physical landscape which underlies this has resulted from the work of the elements over thousands of years, wearing away the underlying rock. On a clear day, the imposing peak of Fan Si Pan comes into view. The last major peak in the Himalayan chain, Fan Si Pan offers a real challenge to even the keenest walker, the opportunity of staggering views, and a rare glimpse of some of the last remaining primary rain forest in Vietnam.

The view of Fansipan Mountain from Sapa 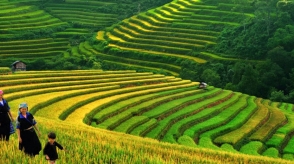 Highlights in Sapa
Sa Pa is a quiet mountain town and home to a great diversity of ethnic minority peoples., Most of them work their land on sloping terraces since the vast majority of the land is mountainous. The geographical location of the area makes it a truly unique place for many interesting plants and animals, allowing it to support many inhabitants. Many very rare or even endemic species have been recorded in the region.
View more