Ha Giang is a city located on the banks of the Lô River in the north-east region of Vietnam. It is the capital of Ha Giang Province. The city has an area of 135.33 km² and a population of 71,689 inhabitants. The population is composed of 22 different ethnicities, of which 55.7% are Kinh and Tày people.

Ha Giang is one of the poorest provinces of Vietnam. Traditionally, the vast majority of its economic activity revolved around agriculture and forestry, but in recent years, there have been attempts to establish a manufacturing industry. Infrastructure in Ha Giang has seen improvement, but remains poor - roads, schools, and health services are less developed than in many other parts of Vietnam. 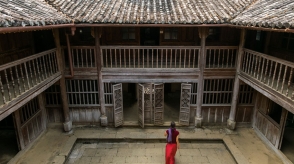