Phu Quoc is the largest island in Vietnam. Phu Quoc and nearby islands, along with distant Tho Chu Islands, is part of Kien Giang Province as Phu Quoc District, the district has a total area of 574 square kilometres (222 sq mi) and a permanent population of approximately 150,000. Located in the Gulf of Thailand, the district of Phu Quoc includes the island proper and 21 smaller islets. The district seat, Dương Đông, is located on the west coast, and is also the largest town on the island. The economy is centered on fishing, agriculture and a fast-growing tourism sector.

From March 2014, Vietnam allows all foreign tourists to visit Phu Quoc visa-free for a period of up to 30 days

- Phu Quoc is famous for its two traditional products: fish sauce and black pepper. The rich fishing grounds offshore provides the anchovy catch from which the prized sauce is made. Pepper cultivation is located inland in the center of the island. More recently a pearl farm was established.

- Tourism plays an important role in the economy with the beaches being the main attraction. Phu Quoc was served by Phu Quoc Airport with air links 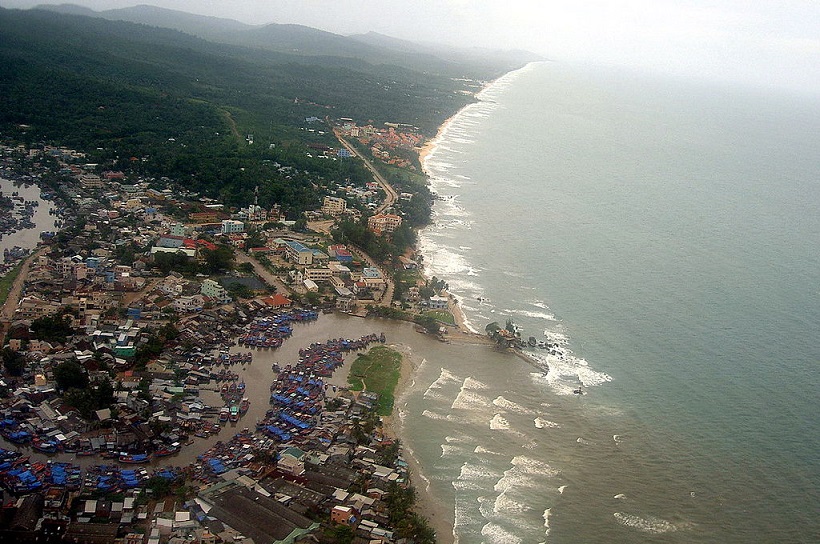 The island's monsoonal sub-equatorial climate is characterized by distinct rainy (June to November) and dry seasons (December to May). The annual rainfall is high

Dry season lasts from November to April. Peak tourist season is December to February and Tet holiday, when rates skyrocket and hotels are packed

Long Beach is the star and it is bearing the brunt of the boom. In the dry season, the 20-plus kilometre stretch of yellow sand that runs from Duong Dong town down the central west coast of the island is the liveliest beach of the island, the entire length offering beachfront accommodation and places to play, laze and dig into seafood while digging your feet in the sand. Being one of the few beach destinations in Vietnam with a western coast, at the end of the day everyone gathers here to worship the memorable sunset.

ATMs are found at the airport, on Long Beach and Duong Dong town. If you’re staying elsewhere, especially on a more remote part of the island, stock up on cash in town.