Vung Tau is located in the south of Vietnam ( 120Km from Saigon), situated at the tip of a small peninsula. It has traditionally been a significant port, particularly during Vietnam's period of French rule. Today, the city's importance as a shipping port has diminished, but it still plays a significant role in Vietnam's offshore oil industry. Vung Tau beach City is the only petroleum base of Vietnam where crude oil and natural gas exploitation activities, and also tourism industry.

Beaches: Vung Tau has extensive beaches, including Back Beach and Front Beach

Transport: From Ho Chi Minh City , it takes about two hours to reach by road, or one hour 30 minutes by hydrofoils, or one and half hour by car on freeway

Vung Tau was a small fishing village in the 13th Century, and became a colonial dominated part of French from 1859 to 1945.

Many historical buildings are still maintained here, which are good for your visit. The beaches are very crowed at the weekend due to the Saigonese tourists.. 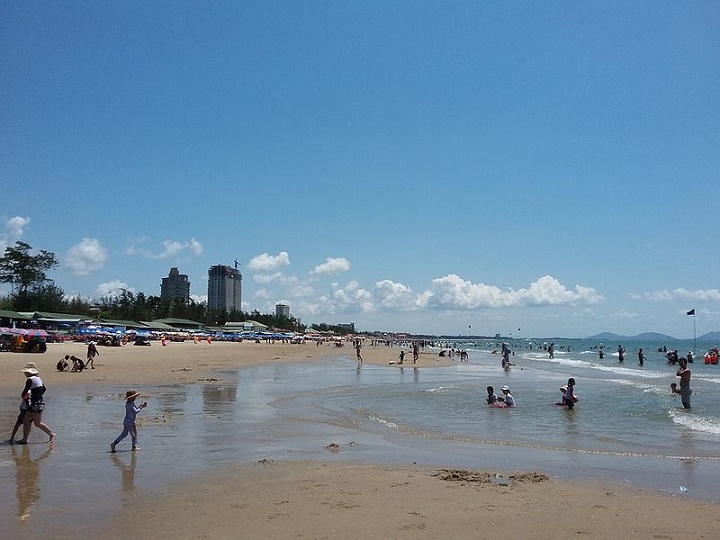 A popular beach in Vung Tau

The Highlights in Vung Tau

·         Giant Jesus: Atop Small Mountain with his arms outstretched to embrace the South China Sea, this 32m Giant Jesus is one of the biggest in the world - taller than his illustrious Brazilian cousin. It is possible to ascend to the arms for a panoramic view of Vung Tau. Note: you cannot enter the actual statue in vest-tops or shorts. Some 800-odd stairs wind their way up the mountain, a Vietnamese version of stairway to heaven

·         White Villa: The weekend retreat of French governor Paul Doumer (later French President), this gorgeous, grand colonial-era residence has extensive gardens and an oddly empty interior (besides the odd piece of furniture and some Ming pottery retrieved from shipwrecks off the coast). It sits about 30m above the road, up a winding lane

·         Lighthouse: Built by the French, this 1910 lighthouse boasts a spectacular 360-degree view of Vung Tau. From Cau Da Pier on Ð Ha Long, take a sharp right on the alley north of the Hai Au Hotel, then roll on up the hill. Although Jesus and the lighthouse look temptingly close, it is not possible to walk or drive directly between them, as there is a military base in the hills here.

·         French Field Guns: Further along Tran Phu beyond Mulberry Beach, a pretty but rough road winds up the hillside to some old French field guns. There are six of these massive cannons, all with support trenches, demonstrating how strategically important Cap St Jacques was to the colonial authorities as it guarded the waterways to Saigon. Look out for Hem 444 in the fishing village, about 8km from Vung Tau, and turn right on a small track

·         Vung Tau's cable car: It provides more views of the coastline and access to an amusement park for kids. The amusement park was the location for an Australian radar station during the Vietnam War. One of the radar station structures remains at the site. There is a small plaque that notes the radar as an historical monument but provides no information.

·         Minh Dam Bases: Minh Dam is located in the Chau Long-Chau Vien Mountains on the southeast side of Long Dat District. Minh Dam reaches 355 meters and extends eight kilometers. The mountains were renamed in 1948 after Minh and Dam, two revolutionary martyrs in the liberation troops against the French and the Americans, During the War, the Long Hải's were a Viet Cong base area, known as Minh Dam secret zone. The VC 445 Battalion and VC C25 Company used the hills as a supply and staging area. The area was deadly for Australian servicemen.
If you are keen enough you can climb the mountain to see a Buddhist Pagoda

·         Long Tan Cross: One of the most well-known Australian engagements of the Vietnam War - external site was the Battle of Long Tan - external site, 18 August 1966. The battle saw the action of 108 ANZACS against a Viet Cong (North Vietnamese) force - external site estimated between 1,500 and 2,500. The Battle was one of the heaviest conflicts of the Vietnam War as well as one the few battles in the recorded history of the world to be won against such odds. Vietnam Veterans' Day, celebrated in Australia on 18 August each year, commemorates the Battle of Long Tan and those Australians who served during the Vietnam War and is an opportunity to remember those who did not come home.

·         Long Phuoc Tunnels: Drive up to Long Phuoc to tour the tunnels dug there by the Viet Minh and Viet Cong.
The Tunnel caretaker is a retired Viet Cong Soldier who will guide you through the Tunnels and escort you through the museum.
The village was destroyed and forcibly resettled by Australian troops establishing an exclusion zone around the newly constructed Nui Dat base in the weeks leading up to the battle of Long Tan on 18 August 1966. The village was one of two destroyed as a Vietcong stronghold, standing on a maze of tunnels, one of which ran nearly 2 miles to Long Tan

·         Thích Ca Phật Đài (Platform of Shakyamuni Buddha: is a notable Theravada Buddhist temple in the coastal city of Vung Tau in southern Vietnam. It lies to the northwest of the Lớn (Big) mountain and was built between 1961 and 1963 when it was opened.

·         Vung Tau Market: Opened in 1985 to cater to the everyday needs of the locals, the market has since over-flown onto the streets, boasting dried fruits, embroidered velvet and delicious local fare. The result is the genuine feeling of a market with vendors who are far from pushy.

The highlights in Vung Tau
Vung Tau is a beach city, just 120Km from Saigon. You can get a spead boat (hydrofoil) for 1,5hours or go by bus for 2 hours.
View more