HALONG BAY is listed & protected by UNESCO as the World's Heritage Site for its nature beauty and eco-system.

The bay features more than 3000 limestone karst islands & islets in different shapes and sizes. These larger zones share a similar geological, geographical, geomorphological, climate and cultural characters. Each top of island has its thick forest vegetation which is useful for the mamal animals.

Protected size: It covers over 1,550 sqkm2, including over 2,000 limestone islets. All the limestones rocks were created over 280 - 500 million years ago in different conditions and environments.

The evolution of the karst in this bay has taken 20 million years under the impact of the tropical wet climate.The geo-diversity of the environment in the area has created biodiversity, including a tropical evergreen biosystem, oceanic and sea shore biosystem.

Halong Bay also has various number of caves, many of them are above the sealevel, while many others are under the water, According to the archaeologists, the human being ever inhabitated in the caves from 5000 - 8000 BC, as they found some spring shellfish (Melania), some fresh water mollusc and some rudimentary labour tools left in some caves. So the evidence is that Halong Bay was over the sealevel for about 7000 years ago. And this part of Vietnam sunk into the sea, the sealevel had killed the jungle and mainland eco-system. The change of earth crust had made Halong Bay like what we have seen it today, and the last animal survival tried to stay on the green vegetation on the top of islets, island.

Halong Bay is home to two ecosystems: a tropical, moist, evergreen rainforest ecosystem; and a marine and coastal ecosystem, so many islands that dot the bay are home to a greatmany other species.

- In 1994, Halong Bay was first listed as World Natural Heritage in recognition of its outstanding, universal aesthetic value

- In 2000, Halong Bay again was recognized for its outstanding geological and geomorphological valueas

The name of Halong Bay: According to the legend, the people believe that this area was created by heaven Emperor. When Vietnam was invaded by the North Enemies, the Emperor sent the mother Dragons to form the rocks and islets. Those rocks are to protect Vietnam from any bad attack.

Halong means " a place where the dragons descended" 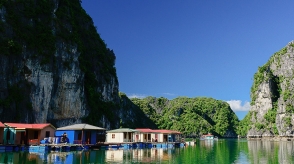 Vung Vieng Fishing Village
Vung Vieng is a remote fishing village in Halong Bay, there are about 200 people living on fishing by small boat, and raising the fish farm in the water. The government now must move them to the main land, because of pollution which they do here everyday.
View more

Famous Caves in Halong Bay
The famous caves are big and approachable in the centre of the bay, where you can explore by yourself during your trip to Halong Bay
View more